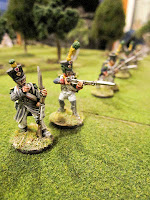 First off, an apology for the paucity of blog updates in the last few months, but between travelling and then getting back into the swing of uni back in Australia, it's been difficult to find the time. What time i have had has been devoted to terrain making (trees, terrain boards, buildings, fields and more trees seen in the below pictures) and painting and basing up the remainder of my French and Austrian Napoleonic figures.

So, to get the ball rolling again, here is a quick after action report for a solo game I recently played of the Toofatlardies set Sharp Practice. I've now got enough figures painted up for a decent game, and so have been playing through the rules a few times before introducing them at the local club. Even solo, the rules are great fun and play through quickly as well. The ability to generate random personalities for the Big Men who control the action infuses the game with elements of role play, which adds a lot to the fun and flavour. 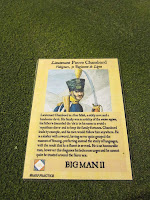 French Big Man Chambord's card, showing his status and his potted bio, along with any bonuses he gets.

Over the next few weeks I'll be doing some blog posts briefly outlining the units, and providing potted biographies of the Big Men. Rest assured though, I've also got a plethora of museum photos which i'll be sorting through and posting up - and let's not even get started on my Dux Britanniarum project!

So, without further ado, here is the report.

The battle was set in a wooded clearing 'somewhere in southern germany' in 1809. Two groups of Austrian infantry were holding a solidly constructed farmhouse in the centre of the board, and three French groups - the vanguard of a major attack perhaps - were tasked with clearing this opposition. The Austrians had another of their groups appearing as reinforcements on the third turn of a blank card. 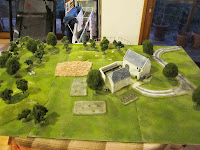 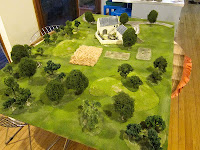 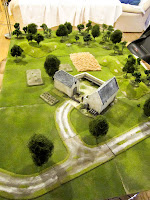 The table, showing off my new terrain. The French advance from the wooded end, Austrian reinforcements arrive along the road.

For those who don't know, TFL rules focus on the role of commanders, the 'big men'. The mechanics are card driven, which gives the game a real sense of command friction, with the action ebbing and flowing in a randomised way. Troops which have not been spotted appear on 'blinds', 6"x4" oval markers. Cover such as buildings or trees also counts as blinds, so stationary units could appear anywhere. This forces players to approach terrain in a realistic way - is the shutter banging in the barn up ahead a sign of enemy troops, or just the wind?

French blinds move through the trees towards the farm.

So, the game began with the French on blinds and the Austrians invisible in the farmyard. The french advanced through the woods, with the Austrians spotting one group of French voltigeurs (line infantry skirmishers) on the treeline. Spotted, the French troops were deployed onto the table. 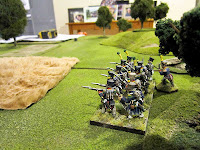 The voltigeur officer, Lt Chambord, ordered his men to shake out into skirmish line and to attempt to spot the troops in the farm buildings. After a few attempts, a group of Austrian grenz infantry (Croatian light infantry) under the command of Lt von Pavic were seen on a makeshift parapet. A desultory fire opened between the voltigeurs and the grenzers which was to last for much of the game, achieving little but to tie down the two groups. 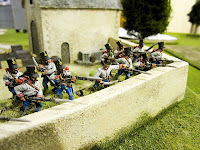 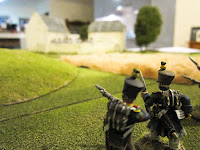 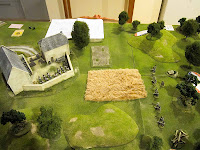 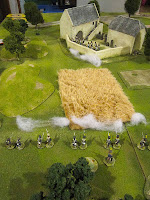 Meanwhile, two French blinds were moving through the cover on either flank of the battlefield in an attempt to get around and outflank the position.

French blinds move around the flanks.

A group of French carabiniers (light infantry assault troops) under the impetuous Lt Pieron deployed from blinds near the rear entrance to the farm. 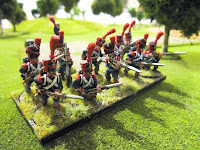 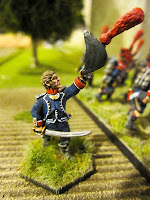 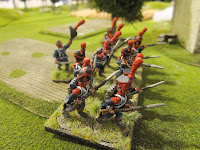 Vive l'Empreur! Pieron gallantly leads his carabiniers into the farm, but will it be death or glory?

As they charged into the narrow space, they were confronted by the lowered rifle barrels of Austrian Lt Pohl's jagers, whose point blank fire took a heavy toll on the carabiniers. In the chaos of the ambush, Pieron was hit, only his metal cigar case saving him from death. The jagers loosed another volley, throwing the shattered carabiniers back, and leaving the track strewn with the blood and bodies of France's finest. The shock inflicted by this action, combined with Pieron's poor command ability, meant that the carabiniers stayed put for the rest of the game as Peiron tried hopelessly to rally the men for another attack. 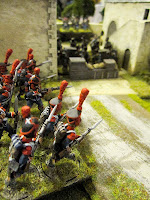 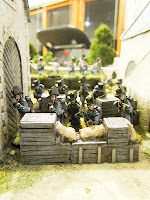 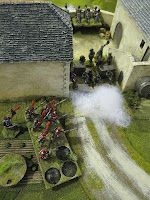 Oh dear... Pohl's jagers fire two deadly volleys into the carabiniers, throwing them back in disarray. Pieron himself narrowly avoids death (thanks to the 'luck of the devil' card).

Meanwhile, on the northern flank Austrian reinforcements arrived on blinds right in front of a still hidden french unit. The Austrians, a group of regular line infantry under Haputmann Biedermeier, were quickly spotted. 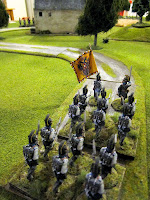 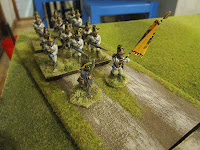 The French, a group of grenadiers under the grizzled veteran Sgt Boursin, and with Major Driant, the French overall commander, deployed and fired a volley into the Austrians. The volley inflicted little damage into the Austrians, however Driant decided the moment was ripe for the big French grenadiers to charge home. 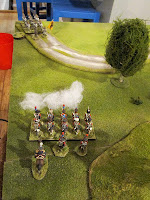 Unfortunately for the French, their charge had not quite reached when the Austrians unleashed a deadly volley into the ranks, cutting down several grenadiers. With the grenadiers wavering, it fell to Sgt Boursin to lead the charge down the last few feet. Despite their best efforts, the Austrians under the command of the cooly capable Biedermeier met the shaken grenadiers with a surprising ferocity, pushing the big Frenchmen back. As the grenadiers retreated over the bodies of their dead and dying comrades, the Austrians calmly reloaded and loosed another devastating volley. 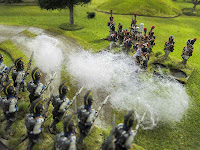 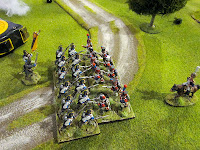 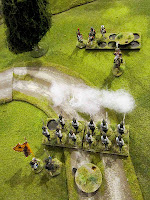 Things are not going well. The Austrians unleash their volley just before the grenadiers close with cold steel. The shaken grenadiers loose the fight and fall back, the Austrians pouring another volley into the fleeing Frenchmen.

The pathetic remnants of the elite grenadiers fell back into the cover of the woods, where Boursin managed finally to rally them. 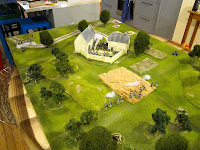 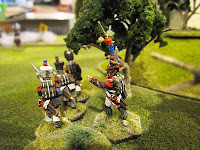 The battlefield following the grenadiers' repulse, Boursin desperately tries to rally the three surviving grenadiers. Things are not looking good for the French.

In the confusion, Major Driant had been left standing rather foolishly alone against the foe. Faced with the bloody bayonets of Biedermeier's fusiliers, Driant decided that discretion truly was the better part of valour, yielded his sword and was escorted off into a comfortable captivity. 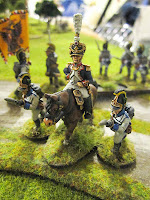 For you Monsieur Driant, the war is over.

As Driant neared the farmyard, he noticed smoke billowing from the buildings. A pipe carelessly left on a haystack had set fire to the farmhouse, and if the fire consumed the farm complex the austrians might be yet be defeated. Unfortunately for the French, the quick thinking Lt Pohl hastily formed a bucket line with half of his jagers, and using water from the animal trough managed to get the fire under control. 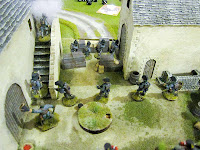 Seeing the tide of battle had turned, the Lt Chambord led his voltigeurs into the wheat field where they lay down a surprisingly effective fire on Pavic's grenzers, killing three men and forcing the rest to keep their heads down as the remnants of the french fell back to the treeline. 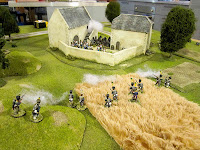 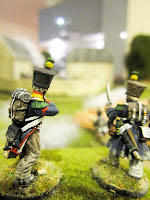 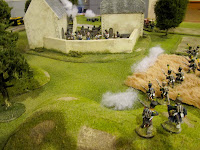 So, there you have it. The French retire with a very bloody nose, and the Austrians carry the day. Long live his Imperial and Royal majesty, Kaiser Franz! Were it not for some very poor die rolls on the part of the French, which not saw both the Grenadiers and the Carabiniers unable to close in time to avoid deadly short range volleys, things might have turned out very differently. The leader's capabilities and personalities really have an impact as well, such as Pieron's impetuosity and his hopeless attempts to rally his men. Its these little touches that really help to turn a series of cards and dice rolls into a gripping narrative rich with human drama.

I'm currently painting up some 'donkey wallopers,' a group of six of the wonderful new Perry Austrian Hussars. Together with their completed opponents, six elite troopers of the 11th Chasseurs a Cheval, these guys will be the next addition to my forces.

I've managed to wrap my head around the infantry rules now, so am hoping to get the guys down at the local club to have a look in the next few weeks. Expect more AAR goodness.
Posted by Ben Fiene (Ansbachdragoner) at 12:16 PM